Walled gardens, the closed advertising ecosystems of online platforms are defining digital advertising: although they are highly efficient and secure platforms which also excel at cross-device tracking, they leave marketers in the dark about transparent user journeys. They also drive most of the online ad spending out of region, and governments have tried to tackle this over the past years with varying results.

Google’s and Facebook’s dominance in the online ad scene is no novelty: in the CANnual Report 2019 we wrote that these two tech giants had (on average) a 50% share of the digital advertising spending of CEE member states of the European Union and that share has risen since. Specifically for the Central and Eastern European markets this means that well over the half of advertising budgets disappear from the local economy.

Some CEE governments have tried to tackle this supremacy with different approaches and varying results, but Facebook and Google not only hold their position, but their market influence is also definitely expected to grow in the near future. As Dániel Villányi, Head of Digital, Café Communications (HU) wrote in his article of the most important digital ad trends of 2021, with Google will eliminating third-party cookies by 2022, these walled gardens are rising their walls even higher, while marketers are left in dark about what really happens with their campaigns on these platforms.

What is a walled garden?

The term ‘walled garden’ was first used by John Malone, the founder of Tele-Communication Inc. which was later acquired by AT&T. Since then, this term has mainly been used in the context of a closed platform. A walled garden is a closed ecosystem with its own technology, information and user data, which means that the exchange of user data via cookie syncing between parties is made hard by these platforms, although this is necessary to show relevant ads.

As Google has over 1.5 billion Gmail account users, and Facebook has over 2.5 billion monthly active users and is the most popular social platform in the CEE, it’s clear that they possess immense valuable user data and they are practically unavoidable when targeting audiences. Martin Koprek, Media Director at Ascanius Media wrote in the CANnual Report 2020: “As for performance campaigns, social (Facebook & Instagram) and Google channels are the most effective tools, and Google Display Network is the most common programmatic channel.”

These walled gardens proved to be very efficient channels for most advertisers: these platforms have extremely detailed profiles of hundreds of millions of users, and since they are built on a foundation of logged-in users, this enables them to track each person across devices. For the rest of the ad tech this would be rather challenging, but these tech giants have enormous data from cross-device tracking, plus third-party cookies are not needed when you’re in a first-party platform.

They also tend to be secure from the user’s viewpoint: for example, Facebook allows advertisers to run targeted campaigns, but advertisers receive no data on where their ad is appearing, unless a user clicks on the specific ad, the advertiser will not know anything about the users who just saw the ad.

What’s the problem with it?

The above mentioned user security translates to lack of transparency into measurement and reporting on the advertisers’ side. Brands would love to assess the consumer mindset to perfect their message, but the walls are there to restrain them from seeing consumer decisions and auditing algorithms.

Another problem is that the acquired data is portable outside each platform: experience gained from using Facebook ads is usually not applicable to a Google Display Network campaign or outbound email campaign. Plus, brands generally receive an aggregate view of their campaign performance, leaving the brand with less knowledge about its costumers and their interactions across platforms. These factors force advertisers to make cross-platform decisions blindly – not knowing the full customer journey.

Another facet of the omnipotence of these platforms is their ability to absorb a disproportionately large part of ad budgets, based on a comparison of where internet users spend their time and where advertisers spend their online budgets. A 2020 survey about US consumers revealed that “while American consumers spend about 66% of their time on the “open web” (which they define as any online property, website or app not owned by a major tech company such as Facebook, Amazon or Google), those sites only receive about 40% of digital ad budgets.”

What happens in the CEE?

In the CANnual Report 20220, we wrote extensively about the regional measures: many CEE countries have tried to tackle the dominance of these tech giants, as the European Union failed to achieve a union-wide agreement. In the Baltic states, some of the local portals started selling in-screen impressions to be able to fight these local platforms, other countries imposed a digital tax, with varying results: in 2019, the Czech government approved of a 5% digital tax on “companies with global revenue over 750 million euros ($826.5 million) annually, 100 million Koronas ($4.32 million) turnover and a reach exceeding 200,000 user accounts in the Czech market.”

The Hungarian government also got a green light for such a tax after a ruling of the General Court of the European Union. Hungary introduced an advertisement tax in 2014, which would apply on turnover derived from the broadcasting or publication of advertisements in the country, and critics claimed this tax discriminated specifically against large multinational tech companies. After a European Commission decision in 2016, stating that the Hungarian tax violated EU state-aid rules, in June 2019, the General Court of the European Union annulled this previous decision by the European Commission.

Bojan Popović, Managing Director at AM Komunikacije (SI) explains: “While local media are doing their best to try to slow down this process, mainly with projects that are going beyond plain advertising–rather integrating it with the content of the media to create advanced advertorial and creative partnerships –, the feeling remains: more could be done to support the local media market and economy, especially in (post)Covid times, when supporting local businesses and causes has finally become more than just a buzz-word a megatrend truly affecting the consumers’ purchasing process.” 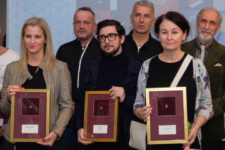